The June issue of Global Dialogue (GD7.2) has now been posted. We lead with Walden Bello’s shocking exposé of the dictatorship of President Duterte of the Philippines. Apart from documenting the atrocities of Duterte’s Regime, Bello explores the parallels with the Third Reich.  There follows a collection of articles by the outstanding Pakistani sociologists and anthropologists at the Lahore University of Management Sciences – articles on migration to the Middle East, gender violence and work, and the politics of infrastructure, as well as two articles on the Pakistani diaspora in the United Kingdom. And then we have another collection on Canadian sociology, pointing to its engagement with policy issues, despite open hostility to sociology from the previous conservative Prime Minister. We also have three moving tributes to one of sociology’s prophets – the world-renowned, Zygmunt Bauman. Then, we have the first of what will be a series of articles on life under Trump – this one concerns the defense of undocumented immigrants. And the Argentinian editorial team writes about the challenges of translation into Spanish. 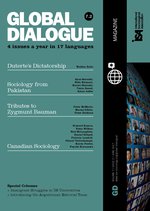 Donation and support to PSA

You can donate or support PSA.